The remarkable true story of the small town that welcomed the world.

There was a time when you couldn’t call yourself a true international traveller unless you’d been to Gander. It may just be a speck on an island off the eastern coast of Canada, but in the pioneering days of post-World War II air travel, jet-setters couldn’t get between Europe and the US without a pit stop in this small Newfoundland town.

In time, these “tourists” became the attraction, and locals would visit the airport to see which luminaries were dropping by. A plaque in the time-warp terminal records the likes of Roy Rogers, Sidney Sheldon and Nicole Kidman.

Ganderites might also catch a defection. The airport saw several, from Russian chess players to young Vietnamese woman Phan Thi Kim Phuc, who as a nine-year-old had famously been photographed, naked and shockingly burned, running away from a napalm attack in 1972.

But once long-range jets made the Atlantic crossing a doddle, Gander was left in peace.

What happened next was par for the course for these hospitable Newfoundlanders, but the outside world sees it otherwise. A stream of visitors has been flowing into Gander, 330km north of the Newfoundland and Labrador capital St John’s, to hear first-hand the stories of what it did for the “plane people”. And the stories have gone around the world in song, through the hit musical Come From Away, which has just had its Australian premiere in Melbourne.

Local teacher Brian Mosher learned of the terrorist attacks on the US when he hooked up monitors for a media studies class and saw every channel showing the burning towers in New York. Then he noticed the skies around town were full of planes. “You could just taste jet fuel. They were all jettisoning their loads.” US air space had been shut, and 200 planes in the air couldn’t land.

Of alternative airports available, Gander’s was special. The largest in the world when it opened in 1938, it was maintained for its military value during World War II and its size meant it has been a get-out-of-jail card for transatlantic flights experiencing problems. Gander is an airport with a town attached.

“Ever tried to turn a school into a hotel?” asks Brian, holding court at Gander City Hall for participants on the town’s Beyond Words tour. They put down gym mats, borrowed army cots, and then Brian, who moonlighted as a presenter on Gander’s cable channel, went on air and put out calls. “Within 40 minutes the stream of headlights started coming into the parking lots. Within an hour we had the school ready.”

But first, authorities had a word with its staff. “Being debriefed during a time of world terrorist threat brings the mood down,” Brian says. He was ordered to shut off the 9/11 stream and staff were told to watch for “odd activity” among passengers.

The plane people arrived and Brian was eventually allowed to turn the TVs back on. “That’s when we heard the shrieks and gasps. A woman asked, ‘My apartment is three blocks from the World Trade Centre. Do you think it’s okay?’ All I could do was offer her a cup of tea.”

Abby Moss is our tour guide. She was six at the time, and her memories are of her mother making lots of mac ’n’ cheese and of strangers coming to her home for showers.

Her tour starts at the North Atlantic Aviation Museum, where among the planes are more poignant displays. There are letters of thanks from passengers, random US schoolchildren and the president of Hungary. A piece of steel is from one of the twin towers, one of several such memorials around town. “It’s almost a healing piece for our community,” Abby says. 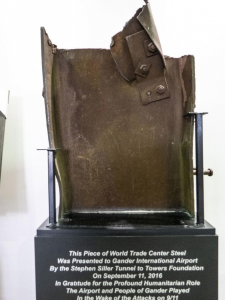 The main port of call is the airport, where passengers were kept on their planes for up to 24 hours until Gander was ready. We look into its wondrous international lounge, which appears to have changed not one iota since Queen Elizabeth opened it in 1959. Described by the National Trust for Canada as its “most important modernist room”, the marble floor evokes the colourful geometry of Piet Mondrian, while seating came out of such illustrious design studios as Eames and Arne Jacobsen. The wooden-inlaid escalator was the first in the province and still the only one in Gander. Along one wall is a mural by Canadian artist Kenneth Lochhead. “The man juggling apples,” Abby says, “represents an air traffic controller.”

The juggling wasn’t confined to Gander, with smaller communities also scrambling to help. Derm Flynn, then mayor of Appleton, 25km away, says their planeload arrived at 2am the next day; that’s why he refers to the event as 9/12. By then Derm had appropriated a number of portable barbecues (he sought their owners’ permission later) and Appleton was cooking.

Derm and his wife Dianne now run their own 9/12 experience, Meet The Flynns. For $C50 ($54), you have lunch in their neat weatherboard home and hear them recount, without boasting, the material and emotional support their community gave the bewildered foreigners.

“A lot of people getting off planes were scared to death,” Derm says. “They were asking, ‘How are we going to get home?’ We were thinking that we were going to war. We could offer them comfort. They could get a meal and a bed in a hotel. But we could give them a hug.” Townsfolk also took the stranded passengers fishing, lent cars and, in Derm’s case, opened up his basement bar for three Irishmen. “The plane people looked on this as an extension of their holiday.”

With a husband in the military, Beulah Cooper has lived all over Canada, so she understands dislocation. She was asked to bring sandwiches to Gander’s Legion Hall, where passengers arrived at 5am.

One woman, Monica from Seattle, “started tearing up”, so Beulah took her home. She later extended the offer to New York couple Hannah and Dennis, and while Dennis was grateful for a shower, Hannah refused to leave the hall as she was waiting on a call from her son, a Brooklyn fireman. So Beulah, who also had a firefighter son, stayed with her, telling bad jokes to break the tension ahead of a call that never came. Hannah’s son, a first responder, had died when Tower One collapsed. The women remain friends.

We part with a hug — “I don’t do handshakes, only hugs,” Beulah says — but not before she explains how, after the plane people left, the town felt lonely.

So give Gander a try; these people need people to hug.

Jeremy Bourke was a guest of Adventure Central Newfoundland and Destination Canada.

MORE TO THE STORY

Life in Gander and satellite towns such as Appleton went back to normal, but then a back-to-Gander event on the 10th anniversary in 2011 attracted the attention of Canadian writers Irene Sankoff and David Hein, who weaved the stories into a musical, Come From Away. (In Newfoundland parlance, anyone not from around there has “come from away”.) Now, these open-hearted Newfoundlanders attend performances around the world.

Some of the show’s characters are amalgams: Brian Mosher is merged with newspaper reporter Janice Goudie, while Beulah Davis is half Beulah Cooper, half teacher Diane Davis. Derm Flynn gets his own character, as does Gander policeman Oz Fudge and mayor Claude Elliott who, upon hearing of their “musical about a tray of sandwiches”, told the writers, “You’ll end up on welfare.”

They’ve ended up in the West End, on Broadway and now Melbourne’s Comedy Theatre, where Come From Away is playing until at least October.

WAITLIST NOW FOR OTHER CITIES

Thank you for joining the waitlist! You'll be the first to hear about exclusive presales and any news about Come From Away!

*By subscribing, you agree to receive email from the promoters regarding Come From Away and future events.

'IT DOES WHAT ALL THE BEST MUSICALS DO: TAKES YOU TO A PLACE YOU NEVER WANT TO LEAVE.'
Joe Westerfield, Newsweek

'A CELEBRATION OF THE BEST OF HUMANKIND, and an uplifting piece of art for our times.'
Tim Teeman, The Daily Beast

'IT’S IMPOSSIBLE NOT TO BE DEEPLY MOVED by this savvy and thoroughly entertaining musical. A tonic for our times.'
Frank Scheck, The Hollywood Reporter